I call this pseudo data science, but behind the scene, real data science is used to test what will work to change your mind (politically speaking), even if it means using spurious arguments. Obama supposedly won the previous election thanks to better data science to reach out to targeted Facebook users (women?) and convince them with the right messages. 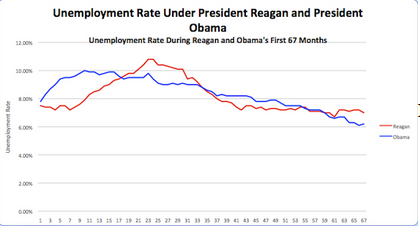 What is wrong with this chart?

This chart, typically associated with the comment that “Obama Outperforms Reagan On Jobs, Growth And Investing”, shows that Obama ends its tenure in better shape than Reagan, in terms of unemployment rates. This is misleading for the following reasons

– Many have left the workforce and are unaccounted for; labor force participation is at an all time low, though part of the explanation is because of baby boomers retiring

– Ask anyone you know about how difficult it is to find a job, despite college education being more expensive than ever before (the proportion of people having a job matching their education is lower today than it used to be)

In short, this chart shows the exact opposite of the reality. Not sure why they chose that very chart for their PR campaign, since there are many charts that would put Obama in a truly positive light – without being misleading. But that’s another question. The answer must be “because it works”.

This site uses Akismet to reduce spam. Learn how your comment data is processed.